Fire is put out with water

The place at the top is called Bemparece (“Good-looking”) and the name does justice to the beautiful view that you can have from there. We climbed up to the plateau where Ana Mira (67) and Carlos Abafa (75) used to pick chanterelles in wet winters. We are surrounded by cork-oaks, most of which have been burned. The blue sky appears amid the treetops and, in front of us, we can see the mountains. Just a few years ago, everything was different. There were lots of chestnut-trees and cork-oaks here, more than a hundred years old, whose dense tops offered continuous shade. Some of these giants, dating from before the great earthquake of 1 November, 1755, were destroyed by the successive fires of the last 30 years: in 1991, 2003 and 2018, Monchique was devastated by fires of truly catastrophic proportions. The flames devoured 28,000 hectares of forest, most of which was a eucalyptus monoculture for the paper industry. With a tape, I measure the circumference of two chestnut trunks that were destroyed and then cut down. It is more than six and a half metres, more than a thousand years old. 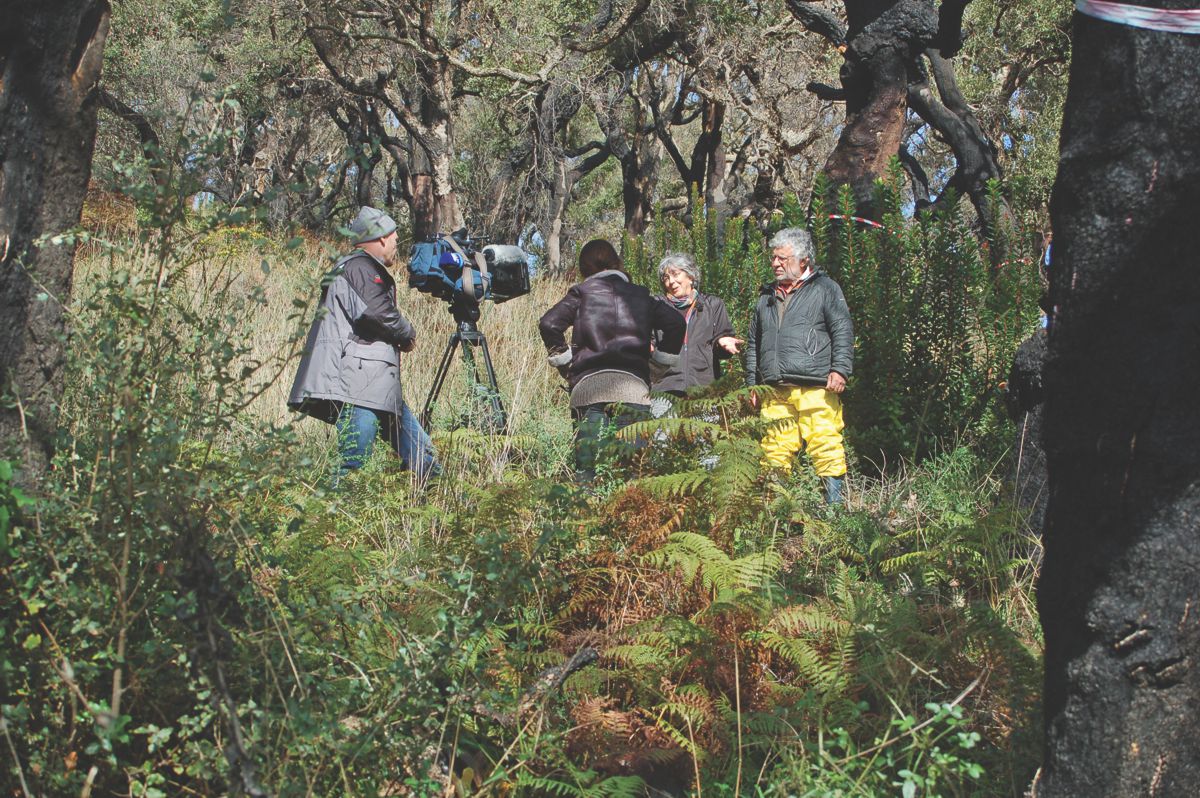 And now I am standing in front of the bulldozer that raises its huge arm to remove a shovel full of soil from the free area between the few trees that are still left up here. The excavator rotates and releases its load. During our walk, Ana, a retired art teacher and sculptor, tells us that, now that we have reached the greatest crisis of all, we have two things to do: “On the one hand, we have to drastically reduce our environmental footprint and our CO2 emissions, ceasing to burn fossil fuels. On the other hand, we have to learn to deal with rising temperatures and chaotic meteorological episodes, to be better prepared.” The future of the Earth in terms of climate is uncertain, especially here in southern Portugal. It’s getting hotter and hotter, and drier. The last 30 years have shown that there are more and more extreme climatic phenomena and that nature is becoming unbalanced. In the future, it will rain less and less, and ever more irregularly. The soil and the air in southern Europe are getting drier, much drier. The rain will fall in violent downpours, and these thunderstorms will cause floods and wash away the soil, because there are no trees to hold it in place. Now, more than ever, we are the ones who have to protect nature and the forests of this Earth, in order to preserve the diversity of species in our biotopes. When one species is eliminated, this affects the others and can be catastrophic for the biodiversity of the forest and for the whole of humanity. 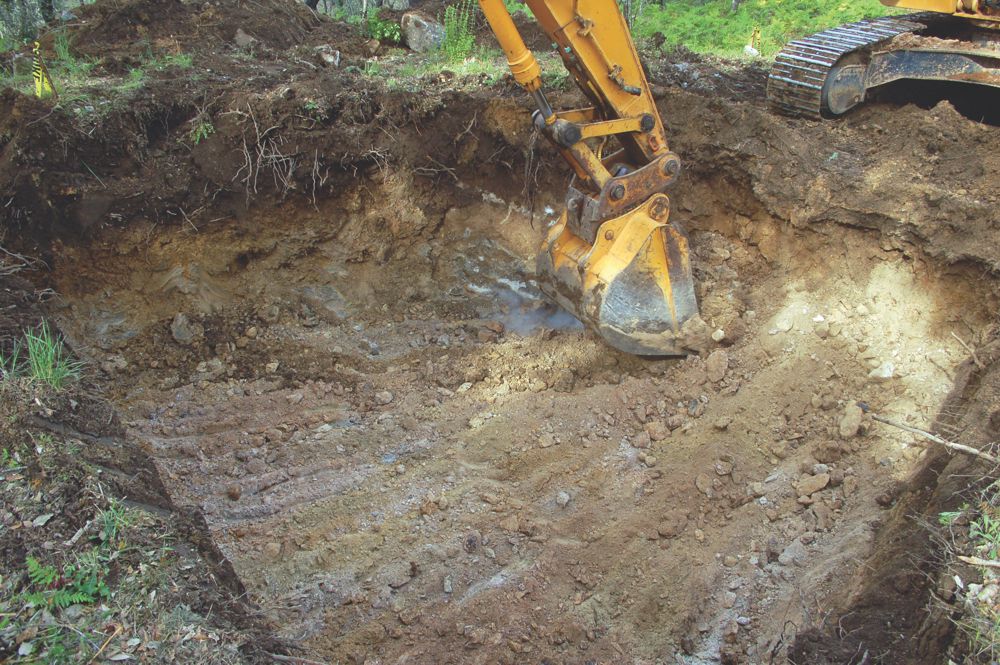 Several weeks ago, Ana and Carlos chose the place on the plateau among the chestnut trees where they would dig a six-by-eight-metre hole, three metres deep, without damaging the roots of the remaining chestnut trees. Ricardo, is an experienced and careful excavator operator and, after a few hours, the hole for the pilot scheme of the association “Monchique Alerta – Serra Livre De Incêndios” (Monchique Alert – Mountains Free from Fire) is finished. It is here that one of the cisterns will be placed in order to help reforest the area with native species, chestnut-trees, cork-oaks, arbutus-trees and many other plants. Carlos, a retired Professor of Design, tells us: we inherited these seven hectares of mixed forest from our parents, which we consider to be a lifelong responsibility. Five of the seven hectares were burned, but we didn’t want to pass them on to the next generation in this condition. This cistern is an investment in the future that gives us hope.

On a Friday in late May 2020, the association delivers the key to its new cistern. It stores 50,000 litres of water and is connected to a system of sprinklers to protect the hillside in the event of a fire and to water small trees during the summer. The whole system operates by gravity and is prepared for a 10-bar water pressure. In this way, any damage caused by the fires will be minimised. Each cistern is the basis for new life. An unspoilt forest stores water in its roots, and through capillary action in the trees. All the species of trees, mosses and fungi communicate with each other, providing a balance of fauna and a better life for all animals (insects, birds, etc.), as well as for humans. 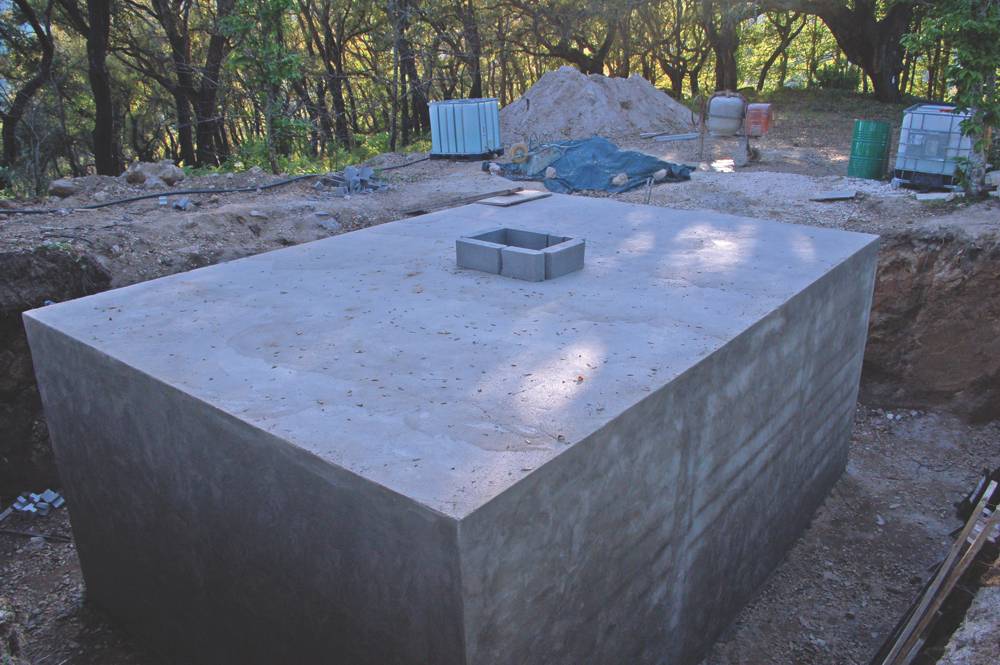 The new cistern has a base measuring four by six metres and is 2.2 metres deep. The three labourers, Diego, Steve and Carlos, have completed their work within four weeks, dead on time, and Ricardo is ready to put some of the earth back around the cistern, compacting it carefully. The cistern will disappear into the earth, and only the hatch will remind us that 50m3 of water will be instantly available here to protect the forest in the next fire. Numerous sprinklers spread across the land begin to release water if Carlos and Ana open the tap. “Fire is put out with water” had been the slogan of the crowdfunding campaign on the Portuguese platform “http://www.ppl.pt/monchique/com/futuro”, to which participants from all over Europe donated exactly 22,390 euros in the autumn of 2019 for the building of four cisterns in Monchique. The first has been completed and represents a first step towards tackling climate change. The three labourers will now move to the next forest owner on the other side of Picota, a 776-metre-high mountain, to make the second cistern for the association. The next two will be built one after the other, and, after that, maybe many more, so that our story will have a happy ending. 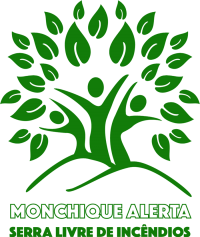 With water, the fire goes out.

Eight days after the first flames, the great fire of 2018 was put out in Monchique thanks to water from nearby dams. Firefighters and aerial resources were on hand to fight the fire. Few inhabitants were prepared for this type of combative task.
Several factors led to the combustion of 28,000 hectares of land, forest and 71 dwellings. A year after the fires, in-depth analysis following a long investigation yielded its fruit: a key reason for this fire was the lack of cisterns and water deposits in the region. Inhabitants who had kept their land clear and built rainwater cisterns proved that it was possible to protect their homes. With water, the fire goes out!
The crowdfunding project Monchique with a Future will help citizens to help themselves. The Monchique Alert – Mountains Free From Fire Association was founded by inhabitants affected by the fire. They intend to support four of the victims of this tragedy in constructing cisterns so that, in the future, they can better protect their forest, their farms and their home.
Each of these tanks will have a storage capacity of around 50,000 liters of water. (please see the design) They will be set up at the highest point of their land, so that water will be transported by gravity. Nuno Carvalho, William Abrantes, Ana Nunes and Carlos Abafa and Jelly Boomsma have all applied to the project and will be supported by through crowdfunding.
This is the beginning of a local solidarity movement in a region that will no doubt feel the impact of climate change. In the future, Monchique will have lower levels of rainfall at less regular intervals, as well as waves of extreme drought. Drought will shape the way of life in the south. The answer to this problem lies in water storage; water, an elixir of life for plants, animals, and human beings…

Evaluation of the Monchique Fire Report